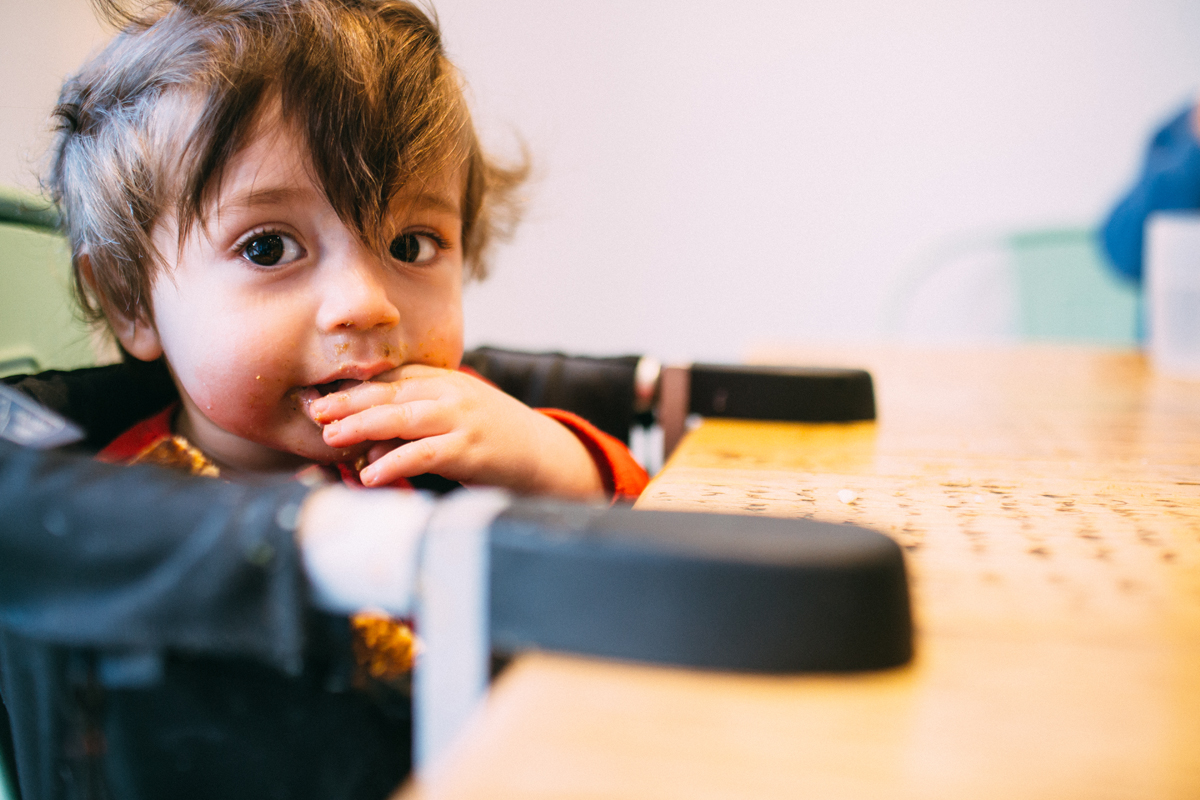 I found becoming a mum second time round vastly different to that brand new mama status. Birthing, breastfeeding, sleeping – everything just seemed that little bit easier and less of a ‘big deal’ when it came to sproglet number two. And nowhere more did I feel this than in the realm of introducing food and weaning. With Jack I remember painstakingly measuring out the exact amount of milk I should mix in with his porridge (3.5 teaspoons, to be exact), I would Google the perfect way to prepare sweet potato for a baby (surprise surprise, it’s the same way you prepare it for an adult) and I would spend ages coaxing him to eat (when he probably just wasn’t hungry). Feeding Sonny has, in contrast, been a wholly more relaxing and enjoyable experience (not least because it was a factor in improving his sleep) With Sonny, I’ve felt excited to give him food and although I’m absolutely no expert, here’s my tuppence worth on why this time round, the whole “getting-food-in-their-belly” process has been fuss-free and fun:

1. It’s not a race. As with most things baby-related, people tend to want to rush development and probe other mums about what they’re doing. “Has he had banana?”, “She’s had mango”, “What? Seven months and you’ve not given him any food?”. Life – least of all, feeding your baby which is the most natural process there can be – is not a race. So just remember; it doesn’t matter if the child at your local playgroup has tried courgette aged 6 months and yours is still suckling at the breast.

2. Babies palates are fickle so even if your little one doesn’t seem to like something on a Monday, chances are that by Friday he/she will. Keep trying foods that at one point your baby didn’t like and try to avoid labelling your child and their tastes. So for example, “my baby doesn’t eat vegetables” could simply be reframes as “at the moment or this week, he’s not eating vegetables.” 3. Don’t be intimidated by the jargon. There are two main culprits here: ‘baby led’ and ‘puree’. Or should I say “or”. I’m not sure why but people seem to approach weaning as if there is only one “method” and that you have to “choose” between these two perfectly different, perfectly perfect ways of weaning your child. My advice? Try both – depending what you have in the fridge!

4. Get some decent kit. There are some staples that you’ll need: bibs, cutlery, plates, bowls and a highchair – and there are several varieties so consider what you want carefully. With Jack we had a beautiful wooden highchair but it was an absolute pain to clean. A lot of people love the IKEA one but we have this Moutain Buggy clip on high-chair which I love as it takes up zero space and is portable. I also love the Bamboo Bamboo suction based bowls and plates which have prevented so many plate parties with Sonny chucking the entire contents of his plate on the floor. That being said, remember….

5. Avoid the gadgets. Again, and it’s a pattern in the parenting world, there are a tonne of different gadgets when it comes to feeding babies. I’ll let you in on a secret; if you’ve got hot water, an oven and a magimix or a stick blender, you don’t need any of them. Yes they might save you some time, but they won’t be easy on the bank balance (or on the cupboard space). So say no to stuff and know that I’m sure whatever you own is more than sufficient to cook and feed your little one.

6.Have back ups. If your little one is being a bit fussy, it is always helpful to have some food up your sleeve (not literally, though this is often the case, too) to try to get *something* down them. Sonny will never say no to some of the Organix finger foods and that way I know I’m getting something nutritious down him. That said, I also live by point number 8…

7. Batch cook, smatch cook. This is another aspect of weaning that terrified me; people would talk of spending entire Sunday nights preparing and cooking food for their babies for the week ahead whilst all I could think of was the Sunday night TV that I would miss. I’m sure I’d save myself time but I don’t ever batch cook, I just cook for the children and if there’s anything left over, I might stick it in the freezer. Isn’t that the same thing anyway? I’ve also started making extra of what Sam and I are eating at night and giving it to the children the next day or – making them a separate portion if what we are eating is particularly spicy or contains salt. 8. Don’t stress if they don’t eat. You’ve probably heard the phrase: “Food is for fun until they’re one” (and even beyond, I would say) and I think it’s a great one to remember so long as they’re drinking their milk. If your little one doesn’t eat much for the odd meal here and there, they will absolutely be OK* – plus, read on for what I do in such scenarios…

9. Watch for the signs. With Jack, one of the main reasons I think mealtimes turned into lengthy events is that I was ignoring his signs that he didn’t want to eat. So now when Sonny turns his head, spits something out or pushes it away, I refer to point #9 and move on with the day.

10. Ain’t no denying the mess. Some people put down sheets and there are amazing products on the market to help avoid the amazing amounts of mess that feeding a baby creates, such as this one. So far, however I’ve never been organised enough to alleviate the mess so instead I try to just embrace it and remember, as I’m on my hands and knees for the third time in a day scrubbing the kitchen floor, that this is just a phase and actually it’s quite good for my flexibility. That being said, if you like things neat and tidy, you’ll want to consider how to alleviate the mess. If you’re soon to embark on the food journey, or are in the process of, that you might have found these tips useful. Ultimately, eating food and feeding our children should be fun, but these days it can become hyped up and another source of worry for parents.

What have your experiences been when it comes to introducing food? Has it been a positive experience ? What tips have you got that you can share?

Thanks so much for reading, as ever.

This post is also in association with Organix who have put together some tips to help you on your journey. We – or rather the kids – are huge fans of their finger foods and we pretty much don’t leave the house without a bag of some of their finger food. * I’m not an expert but it’s my gut feeling