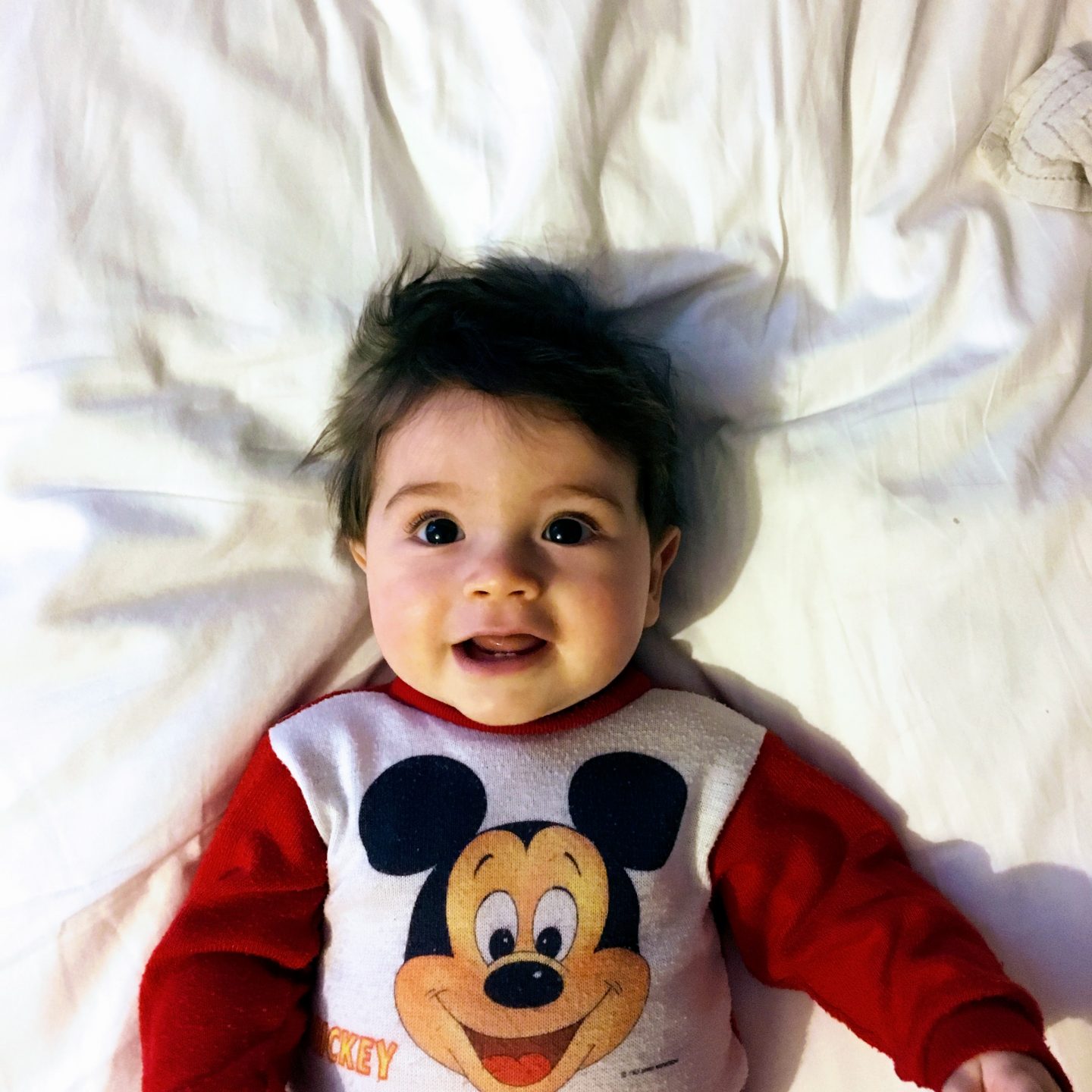 Around the months of October and November 2016, I went through some pretty dark times as a mother and as a person. Although inside I felt deeply happy and full of gratitude, there were mornings where my whole physical being ached so much I could hardly move, I consumed more cups of coffee than I care to recall, and I don’t think I went near make-up for weeks. You see, at around the age of four months, Sonny went from sleeping beautifully to thinking night time was rave time. And by that, I mean he would wake every 45 minutes at night. I talk about it here and this was one Instagram post where I felt particularly broken. He just couldn’t stay asleep and was waking after every sleep cycle, unable to fall back asleep and making me dread nights and feel at best, like a zombie the next day and at worst, totally unable to function and fully understanding why sleep deprivation is a form of torture.

To set the scene a little, Sonny’s birth was wonderful and straight forward (I made a video about his water birth here) and I recovered pretty much immediately. He seemed a really content chap and slipped beautifully into our family. Perhaps for precisely these reasons, although it wasn’t the plan and we hadn’t done a day of it with Jack, we seamlessly started co-sleeping. It worked flawlessly and I loved it from day 1. Sonny would wake up once or twice in the night for a breastfeed which I would sleepily give him whilst still lying down and we’d all slip back to sleep. We took him camping, glamping, and travelling abroad and all the while, he slept beside me, pretty much sleeping through the night bar a wake or two. Happy, dreamy days (and nights!) The story soon changed though as I started to notice small changes; Sonny started waking more often and he was not settling so easily. Sam consequently moved out the bedroom and I started to dread night time as I just would not know what it would bring. Around 20 weeks old now, it suddenly seemed as if Sonny was ‘waking up’ and wasn’t content with mummy’s boob and a warm bed. I sensed something was changing and indeed, the epic Instamum community confirmed for me that four months is a common period of sleep regression. (clearly though, it is due to the baby PRO-gressing – I prefer to frame it this way) It was only getting worse as the days and then weeks went on until there were nights when he’d sleep forty minutes stretches maximum before waking up. During the nights, which became total blurs, I’d pull different things out of what I’d call my “box of tricks”; Ewan the sheep, pushing (our crib was on wheels), a dummy, shushing, feeding until he finally went back to sleep, co – sleeping, in the crib, in the bouncer, watching TV… these were all tactics I’d try.

Fast forward three months to January 2017 and Sonny has got the hang of sleep and is now sleeping roughly 10 hours straight at night, I have my main man back in the bed and most importantly, I am fully me again minus any aching bones or panicked phone calls to the husband. (I think it was a Friday afternoon when I phoned him gently ahem, demanding that he came home from work early because I simply could not look after Sonny, that’s how exhausted I was (I didn’t even have Jack to worry about…), that I realised that something had to change.

Where I really struggled was the balance between ‘holding out’ – not rushing to make changes safe in the knowledge that “it’s just a phase” (everyone’s favourite phrase) versus actually doing something about an issue. What we did is somewhere in between. I detected Sonny was ‘changing’ and so I started to make small changes without doing anything drastic. I want to stress that I AM NO EXPERT; I’m just a mama who trusted her instinct and after having received some epic advice from all of you, and having had a few requests to report back, I wanted to give something back and put out there a few (gentle) things that worked for us:

1. The first thing I did was to assess co-sleeping. Whilst it had been amazing for us and really served its purpose in getting me through those early weeks not to mention the gorgeous closeness, my gut instinct told me that it would help Sonny if he had a bit of space from me. I also thought that perhaps my movements were waking him. So I moved him out our bed and into his crib which I placed directly next to ours and we used a sleepyhead to still give him the feeling of cosiness.

2. Next I started to think about how much he was eating. I was solely breastfeeding, which I loved but also I started to think he was snacking by feeding so regularly in the night. Every time he woke I would get concerned that he might be hungry so I would automatically feed him (this was also the quickest way to appease him) but in my heart, I knew this wasn’t necessary. So I decided to switch to formula at bedtime (I believe this keeps them fuller for longer), gave him a dream feed (11pm) and I started weaning him a little earlier than planned (5 months old). These days, at nearly 7 months, I try to get as much food down him as possible during the day. I don’t necessarily stick to strict meal times either…Put it this way, Sonny likes his banana and his carbs!

3. After this, I decided it was time to signal to Sonny that had he his own space and so we moved him out the bedroom altogether and used this opportunity to also put him in his cot. This felt really strange at first (and all the running up and down the stairs was a little exhausting) but I honestly wish we had done this earlier. After all, if our noises were what was waking him that would be darn annoying! By now it felt good to have our bedroom back and Sam moved back in – a big step.

4. One thing that’s tough to determine as a parent is how much you want to ‘depend’ on things and develop what experts call sleep associations which a baby needs to get to sleep. But I am a firm believer in “do whatever works” so to this end, we use all the gadgets! You can see below Sonny has a dummy, Ewan the sheep and the WhisBear (this is fairly new and amazing – it automatically activates white noise when the baby starts crying) We’ve found all these really helpful. 5. Whilst I am not at all one for the ‘crying it out’ method and was not willing to do this, I did start to leave Sonny a little longer before going to him. Whereas before he’d been in the room with me, and as soon as he cried, I went to him (apart from the fact the noise of crying isn’t particularly nice), with that bit of extra space I could leave him to start to cry for a few moments before going in. I think this gentle amount of time being alone also helped him on his path to self-settling.

6. I started to make some small rules which I really stuck too and still do. I do think this consistency is important and helps Sonny know what to expect (on the whole, anyway!) So for example, I don’t feed Sonny any milk when he is in his cot, (I always take him out), I always try to offer water in a bottle first if he does wake in the night and I do a lot of shushing standing above him. Hopefully he has now begun to recognise these signals from me.

7. Jack always slept in the buggy during the day but instinctively I started to put Sonny to sleep in his cot in the daytime and I do think this helps as he is learning that his cot equals sleep. I tend to do this for his first nap of the day (if I’m at home) but later on if he naps, I will put him in the bouncer so it’s not too close to bed time. I also always keep the curtains open to maintain a difference between day and night though when he does nap in his cot.

8. I try to put him in the cot for bed whilst he is awake (as opposed to breastfeeding him to sleep as I used to do). I then will tend to stand over him a little, ssshhhhhsing or just walk out and as per above, not go in immediately if he does become unsettled. I always have the room very dark (unlike for day naps).

9. Heidi at the Parenting and Baby Coach kindly offered me some complimentary advice. Although I was skeptical about seeking professional help, it was really admittedly very helpful to speak to people – albeit with totally opposing views – to get some ideas and generally just some reassurance that things would improve. She set me out a ‘schedule’ which although I did not strictly stick to in any way, it gave me a rough arch of a day to refer to which I found helpful

10. I kept that all important piece of knowledge in my mind at all times: it’s a phase. I had deep faith that Sonny would eventually sleep through the night and I think that positive state of mind got me a long way in those dark hours.

I hope some of the above may help any mama out there if you are going through sleepless nights with a baby who just wants to party all night. Sleep – how much each person needs and what you are willing to do to get it  – is SUCH a personal issue and for me, sleep deprivation is by far the toughest part of parenthood. I’d love to hear if you have any other tips you’d like to share or what your experiences have been.

Are you struggling with getting your little one to sleep proper stretches at night? Any other tips you can share with us?

P.S One Thing About Motherhood that Baffles me and 10 Tips for Hassle Free Potty Training